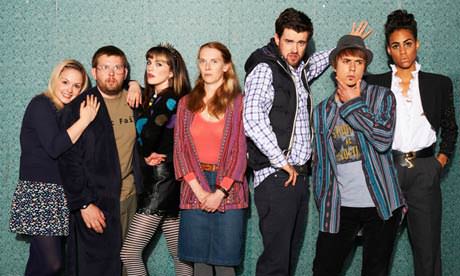 Our location in Manchester’s Sharp Project offers us lots of things. One is a stupid amount of space! Another is the synergy that an environment like this provides. Within Sharp there are 4 shooting stages ranging from 3,700 square-feet, up to a get-lost-inside-its-so-ridiculously-big 28,000 square-feet. Over the past few months, Sky have been on site shooting the second series of Mount Pleasant, whilst Objective Pictures are here shooting the second series of Fresh Meat for Channel 4. We provided our services doing dialogue replacement during the first series shoots of these shows, which enabled us to build solid relationships with the production companies. This also gave us the opportunity to meet Bobby Ball, but no one likes a show off.

This session for Fresh Meat was slightly different however. We weren’t replacing dialogue, or doing voiceovers like normal. Instead, we were recording actors from the show performing a Graham Coxon penned, 9 minute prog-rock epic. No, honestly. We had London-based composer Christian Henson, whose recent credits include Sinbad and Poirot, in the studio to direct the actors and oversee the session. Christian and his team had approached Coxon to write a purposely pompous & obnoxious song for one of the scenes in the new series, which must have been an interesting meeting: “Hi Graham, we need something really ridiculous and we thought of you?!”.

Inbetweeners star Joe Thomas, who plays Kingsley in the show, tackled the song first and managed an uncanny impersonation of Coxon’s demo vocal whilst adding more humour to the performance. Next was Charlotte Ritchie, Oregon in the show, who performed the Coxon track with ease and also gave an impressive performance of an acoustic track to be featured in the show. For the vocals we used a Brauner Phantom, into the Neve Genesys pre-amps with some subtle compression and character added from our UA 1176. Using the huge bandwidth available to us at Sharp, we were able to send the Pro Tools project files to Christian before he got back to London via our 50 meg synchronous internet connectivity.